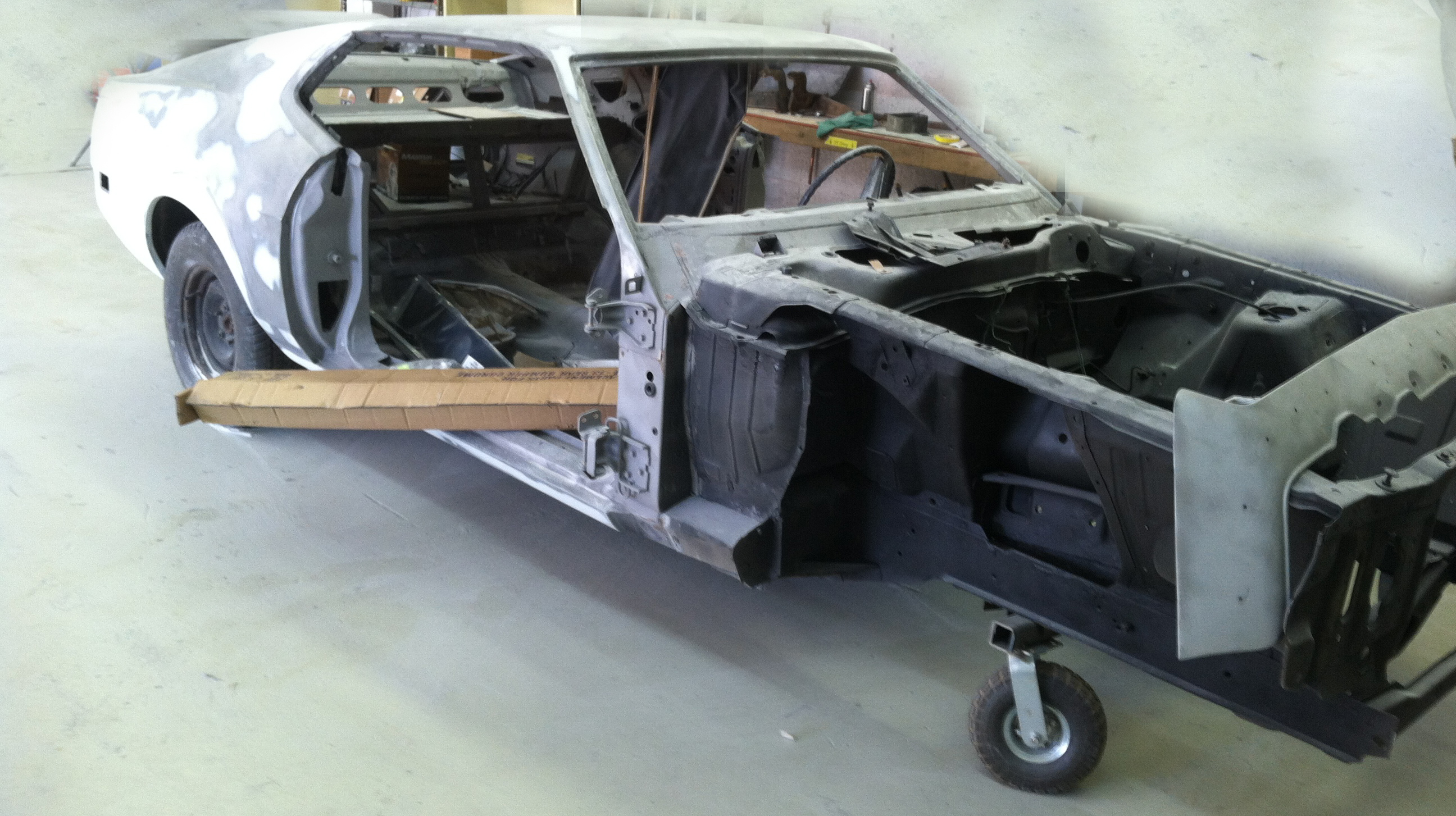 So the first step was evaluate what we had and what work was needed. Next up was the tear down and then it was off to the frame shop, Al's Unibody. Maxine spent a few days getting her original figure back. The years had taken their toll on her and she needed a little bit of tweaking. Al did his magic and next it was off to soda blasting. Then it was time to see Troy at Borne Customs for the bodywork and paint.

The original NASA (NACA) hood was rusted out up front and needed to be replaced. The Dynacorn replacement looked good but didn't line up that well with the factory fenders. As the fenders had already had their share of body work in the past we opted to replace them with Dynacorn parts as well. The rest of the car was quite solid with very few spots of rust in some of the usual places which was all cut out and replaced. We decided early on to return her to the factory color. Fortunately that was Light Pewter Metallic which is one of our favorite colors for the 71 - 71 Mustangs. PPG got the nod for this job, light pewter metallic base. Then troy gave her five coats of PPG DCU2021 clear for a deep finish. We decided early on that we would add the "hockey stick" graphics along with the blackout paint for the center section of the hood and the rocker panels. We used Hot Rod Black for the hood and lower side black outs as it has the proper satin finish. Maxine is a true Mach 1 and as such she came with the NASA hood. She did not come with the front or rear spoilers. We really like the look of the spoilers and we decided we would be adding them to this old girl. We are also making the ram air functional so we are adding the hood locks as well. All functional factory ram air 71-73 Mustangs came with the chrome racing hood locks and we added them as well. You really have to look ahead as one thing can change another.

Troy did a great job on the paint and all the time on body work and prep shows in the end result. I think he was ready to pull his hair out dealing with the stencil for the hood blackout. I want to give kudos to http://www.71mach.com/429mustangcougarinfo.50megs.com/ for information on the paint and graphics. They have an amazing amount of information on how these cars rolled off the assembly line and it really helps when you are trying to get her done. Little things like painting under the cowl end of the hood so you don't see the body color. Painting the center gas cap area and near the taillights in black so the body color does not show around the edges of the honeycomb. Although we did use the original paint color we did take some liberties on the paint. We didn't like the way the engine looks in the black hole that is the stock engine bay. We decided to paint the engine bay in body color. We know that may be a bit too Mopar looking for many pony lovers. We think the result looks awesome and that is what really matters.

Next up was time for Tiger from Tiger Trim. Tiger installed the vinyl graphics. He looked insulted when I got the dawn dish soap and distilled water out for him. He chuckled and said that is for amateurs. It concerned me at first but then  remembered all of the graphic wraps he has done for our company cars and I let him work. Boy it pays to know what you are doing and I think the stripes look great

Watch the restoration of our 71 Ford Mustang Mach 1 "Maxine"